skip to main | skip to sidebar


Labor Day is this Monday, and of course we celebrate the traditional end of summer with picnics and family relaxation. But sometimes amid the hotdogs and last dips in the pool we forget that  Labor Day was created to remember the workers who built our nation and continue to make it prosperous and productive. A visit to the Thomas J. Moyer Ohio Judicial Center would serve as a good reminder of labor’s importance to the United States and the Buckeye State. 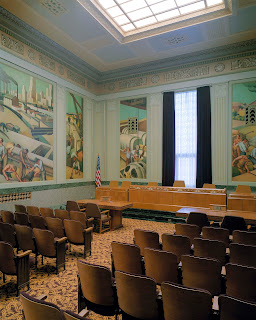 Throughout our historic building there are great works of art that recognize what we celebrate on Labor Day. It is a building that remembers labor, both inside and out.

On the exterior of the building for example, marble bas relief sculptures illustrate dozens of industries from woodworking to beekeeping. On the northeast corner of the center’s exterior, a carved saying proclaims in stone what could be the Labor Day motto: “The whole fabric of society rests upon labor.”
When you enter the building and visit the North Hearing Room you will see the area of the Judicial Center with the most obvious labor theme.

Architect Harry Hake designed this room to be used by the Industrial Commission for workers compensation hearings. John F. Holmer created 11 murals titled The Progress of Industry, which realistically depict the dignity of physical labor. They reflect a style of public art popular throughout the 1930s known as American Realism.

The center panels on the north and south walls to the right and the left as you enter the room are the major paintings in the series. On the right, in the center of the north wall, early Ohio industry is depicted. Men are shown plowing, driving an oxcart, digging, and hauling lumber for a building under construction in the smaller panel to the right. Women are spinning, churning, and carrying water.
Across from this painting, on the south wall is a contrasting scene of a modern steel building being erected.

The rest of the murals are divided between early scenes of Ohio labor and modern work. Flanking the center mural on the left on the north wall, is a scene depicting the early pottery industry, including workers at a potter's wheel, a kiln, and pots drying in the sun. The right hand panel on the west wall shows a blacksmith shop.

A three-panel mural covers the east wall. Pioneers arrive in Ohio in Conestoga wagons toward the  center panel,  a rural scene, while on the right, miners, a coal tipple, and oil derricks symbolize the modern period.  At the west wall on the left side of the window, men work with various machines, in contrast to the blacksmith who uses older hand tools in the scene on the right. The south wall’s  main mural is accompanied by a modern steel mill on the left and   a modern stone quarry on the right.
This room is now used primarily for hearings by Supreme Court commissions such as the Board of Commissioners on Grievances & Discipline.

As you relax this Monday, take a moment to remember the reason for Labor Day. And if you need a reminder, come and visit the Moyer Judicial Center.

Submit your question about the justice system here, and look for answers to recent Justice Judy questions HERE.

About the Justice Judy Blog

As a former teacher and a judge, I take very seriously my obligation to fulfill the mandate in the Ohio Code of Judicial Conduct, which requires that “A judge should initiate and participate in activities for the purpose of promoting public understanding of and confidence in the administration of justice. In conducting such activities, the judge must act in a manner consistent with this code” 1.2 (Comment 6).

This blog is a carefully balanced medium for me to fulfill this obligation using the latest information technology. Studies show that today's young people are the most plugged in generation ever. Blogging offers an opportunity to connect with these young people where they now spend most of their time: Online.

On pages of the Justice Judy blog you will find simple, straightforward explanations of judicial concepts and processes, as well as discussions about current developments in the legal profession and the law.

You will not find political commentary, interpretations of judicial decisions, or anything else that would carry even the remote possibility of violating the other judicial canons, which are in place to ensure that we have an independent, fair and impartial court system.

By allowing comments to be posted, I am able to interact with the public I serve to further the cause of an understandable and accessible judiciary. By moderating the comments, I ensure that the discussion is appropriate and thoughtful. I hope you will become a regular reader and tell me what you think.