skip to main | skip to sidebar

While students are more than comfortable with social media sites, a new national survey says more judges and courts are using Facebook and Twitter now too. 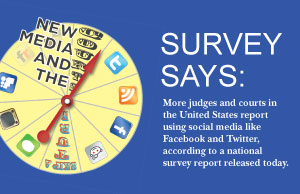 The 2012 Conference of Court Public Information Officers’ New Media and the Courts Survey shows how social media and broader technology changes in the media industry are affecting state and local judges and courts.

For instance, the percentage of judges who strongly agree that their own use of technology poses no threat to professional ethics has doubled since the first year of the survey. This applies whether the new media is used personally or professionally.

The complete project report, “2012 CCPIO New Media Survey, New Media and the Courts: The Current Status and A Look at the Future” is available on the CCPIO website at www.ccpio.org.
Posted by Judith Ann Lanzinger at 1:10 PM

Submit your question about the justice system here, and look for answers to recent Justice Judy questions HERE.

About the Justice Judy Blog

As a former teacher and a judge, I take very seriously my obligation to fulfill the mandate in the Ohio Code of Judicial Conduct, which requires that “A judge should initiate and participate in activities for the purpose of promoting public understanding of and confidence in the administration of justice. In conducting such activities, the judge must act in a manner consistent with this code” 1.2 (Comment 6).

This blog is a carefully balanced medium for me to fulfill this obligation using the latest information technology. Studies show that today's young people are the most plugged in generation ever. Blogging offers an opportunity to connect with these young people where they now spend most of their time: Online.

On pages of the Justice Judy blog you will find simple, straightforward explanations of judicial concepts and processes, as well as discussions about current developments in the legal profession and the law.

You will not find political commentary, interpretations of judicial decisions, or anything else that would carry even the remote possibility of violating the other judicial canons, which are in place to ensure that we have an independent, fair and impartial court system.

By allowing comments to be posted, I am able to interact with the public I serve to further the cause of an understandable and accessible judiciary. By moderating the comments, I ensure that the discussion is appropriate and thoughtful. I hope you will become a regular reader and tell me what you think.